I had a successful hunt on Monday and saw nothing yesterday. I'm kicking myself for tonight. I was hunting in hardwoods littered with white oak acorns. I had a pair of does come in that I saw a long way off. So, I was ready for her and well positioned when she came it. The lead doe came direct at me and then turned at the perfect angle that would bring her right into shooting lane. When she got to 28 yards, was broadside, and had her head behind a tree, I decided to shoot. I had a good aiming point on her. My brain told my finger to shoot and just then, she stepped forward. I could not stop my finger and released the arrow from the crossbow. My elevation was perfect, but I hit her too far back. I knew it before the arrow arrived. Both deer ran off hard and were well out of sight. I waited just a bit and got down. I only went as far as the arrow to verify. The arrow confirmed, just paunch. I'm hoping i hit the liver. I marked the spot and backed out.

I'm sure there will be no blood trail. I can only hope she laid down and died without being disturbed by anything. I'll be walking circles in the morning trying to find her.

Sometimes, even with a fast bow, a good angle and aiming point, things can happen beyond our control, even inside 30 yards....Nuts!

It happens . I’ve hit quite a few just back a bit too far . In each case I’ve recovered the deer . Back out and the odds are you will find the deer . The arrow went through the deer …correct ?

bwoods11 said:
It happens . I’ve hit quite a few just back a bit too far . In each case I’ve recovered the deer . Back out and the odds are you will find the deer . The arrow went through the deer …correct ?
Click to expand...

Yes, good downward angle. complete pass-thru. No blood though and paunch smell was not strong. Brown on fletching. No fat.

I've had my share of paunch shots, but most were when I was younger with a compound bow. A little torque in a hunting situation can go unnoticed. This is my first one with a crossbow. It is a mission sub-one lite, which is very quiet. I saw no indication of string jumping. I'm using an OracleX scope with a laser range finder incorporated in the scope. I'm assuming the elevation was good.

In hind sight, I probably should have let her take a few more steps. Her head and neck were behind a tree, with is good in general, but I think if they were not occluded, I may have been able to tell she was going to step forward sooner.

time is your friend.

Crimson n' Camo said:
If anyone is around you with a tracking dog that will likely be a pretty routine recovery since you didnt push it
Click to expand...

Yes, I really wish I had access to one.

Most likely. Here is the rub. If I assume she went no more that 200 yards and I draw a circle with one edge on my stand and the other 200 yards in the general direction she ran, the radius is 100 yards so the area is 31,400 square yards to search. If you are right, and she stayed in the open hardwoods, there is a good chance I'll find her. But, this is a narrow riparian buffer. It gets much thicker if she leaves the buffer.

Bill said:
time is your friend.
Click to expand...

True, but it may also be the friend of the coyotes...

These things happen to anyone that hunts as many years as we have my friend, I have my share of these type of scenarios that is for sure. Nothing you can take back so don't beat yourself up too bad if you have an unsuccessful search. I know it sucks but it is why we call it hunting and not killing, the highs and lows are all part of the game bud.

Happens to everyone at some point. I can think of twice I've done it. Sucks and feels horrible.

Thanks for the encouragement all. I've learned not to focus on the bad feeling but to replay the event enough to make sure there is nothing else I can learn from it. I learned a lot and improved from many of the failures earlier in my career, but you guys are right. Sometime you can do thing correctly and still have a bad outcome.

If I had to make a guess, I'd say she'd bed down close by since you didn't chase her. She'll likely bed down again within a short distance off and that's where you'll find her. Hopefully the intestines doesn't plug up the holes creating a tough follow. A passthrough is good though, so you might have decent blood once you get going. Sometimes the smell itself or vultures can be helpful to find her. We've all been there. You'll find her. Good luck!

Interestingly enough both of the one's I paunch shot were in the morning and I didn't look for either one until the next day (which consisted of a morning hunt with the hopes of seeing it on the hoof, then a walk afterwards to look for it). 1 of them I found 3 days later bedded near a water hole and the other was shot 2 weeks later by a rifle hunter. Amazingly tough critters!
O

yoderjac said:
Thanks for the encouragement all. I've learned not to focus on the bad feeling but to replay the event enough to make sure there is nothing else I can learn from it. I learned a lot and improved from many of the failures earlier in my career, but you guys are right. Sometime you can do thing correctly and still have a bad outcome.
Click to expand...

yoderjac said:
Thanks for the encouragement all. I've learned not to focus on the bad feeling but to replay the event enough to make sure there is nothing else I can learn from it. I learned a lot and improved from many of the failures earlier in my career, but you guys are right. Sometime you can do thing correctly and still have a bad outcome.
Click to expand... 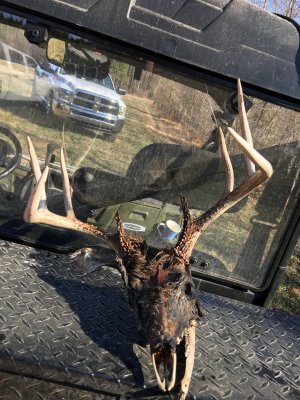 Took this buck 7-8 years ago. Couldn’t find it for the life of me. Found this 6 months later rabbit hunting. Happens.

My bird dog now can blood track. She is one of the few breeds that can point, retrieved, and track.

omicron1792 said:
My bird dog now can blood track. She is one of the few breeds that can point, retrieved, and track.
Click to expand...

What breed do you have?

THE REST OF THE STORY

I waited until this morning to go look for her. When I got to the impact sight where I had marked the arrow in the ground, I looked back at the stand. I saw a few small branches with no leaves that I did not see with the scope. At this point, I began thinking there may be a possible deflection. There was no blood trail at all, so I headed off in the direction the deer ran. When I got to the place where I last heard them running, I took out the FLIR and started scanning. Fortunately, this was a west facing slope and the sun had not yet heated anything up. I'd just walk 20 yard and scan. It was not long until I found her. Just as we all predicted, she had laid down and without being pushed, she died. Just glad I found her before the coyotes did.

Thanks for all the encouragement! I feel better after a positive outcome.

Yes, I realize that nothing is lost and everything goes back into the cycle of life, but for me, it is an ethical thing. I think it is showing respect of the animal. When I make a decision to take an animals life, I need to make every effort to recover that animal. That starts at the decision to release the arrow.

As for herd management, in our early years, we were in the position where we wanted hunters to shoot every doe they could. We basically said, if it doesn't have antlers and you are not positive it is a button buck, shoot it. Even if button bucks were taken, it was worth it to remove does. After years of management our position has changed. We are now taking the position to shoot a doe if the hunter wants it but not to make any special effort to shoot does. So, in this case, the shot was taken for venison, not for management purposes.

Bszweda said:
What breed do you have?
Click to expand... 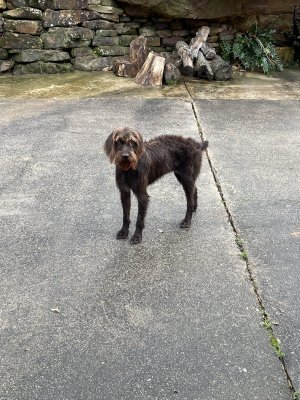