Anyone else use buckeye X7D or X80?

If so, they did a major software and firmware update. Not sure what new features I got but the whole platform looks different. 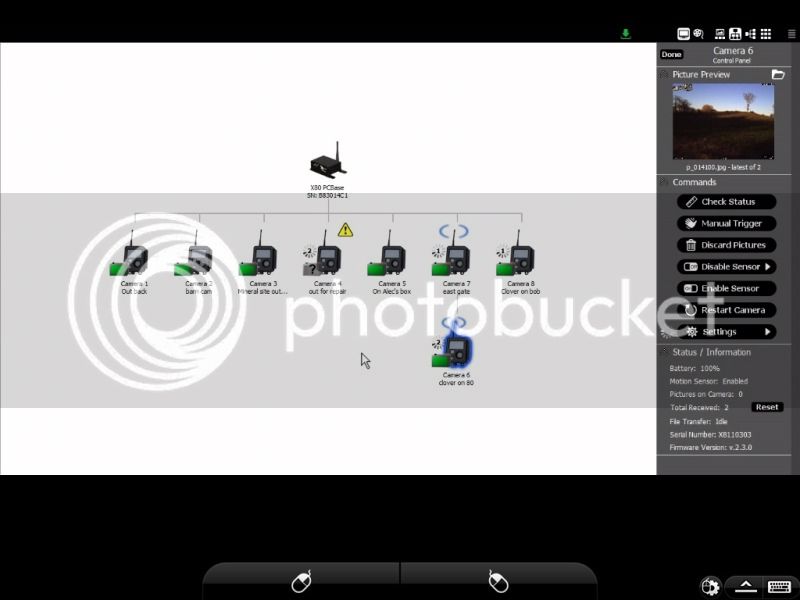 If not this is how my system looks 7 cameras talking to the base. Camera 6 can't reach the base so it jumps them through cam 7.

I have the old school Orions... not the new fancy stuff.

I'm not overwhelmed with the cameras or the software (the software is downright pitiful). Hopefully the new stuff is better.

I sure do like not having to pull cards though.

I thought about buying the Buckeye's for 3 or 4 years. I finally pulled the trigger, and they came out with a new version (XD7) a couple months later. I'm still ticked off about that :)

I had recommended Buckeye to a gentleman that I met at a gathering of friends. He saw me a couple days later and told me he had tried to get more info on them but everything he was interested in was out of stock. Maybe they are selling like hot cakes. I wish I could afford them, but I'll have to stick to old fashioned analog SD cards.

John,
I'd call them and explain your disappointment. They might do something to help convert you over. Worth a try.

Jack,
I don't think they stock many finished cameras but have the parts to build in stock. We've never waited for more than a couple of weeks.
I hear you on price. Our system has been built up over a few years and cost shared with my brother. Luckily we had several of lower cost X7D's that we got 1/2 price upgrades on before they released the X80's.

On thing I know for sure is their customer service is second to none. I broke my PC base (3 years old) snapped the connector. Sent it in with a 2 year old camera that wasn't firing the LEDs on night shot. They were both back in a week. No charge....
You must log in or register to reply here.

E
Building my own Hunting Retreat