I was at a local sporting goods store today an picked up a buck on a bag summer food plot blend by hunter specialties. It had tracker forage soybeans listed on the seedlist. Anyone heard of them or any other forage bean that would be a cheaper alternative to say eagle beans? I got my eagles late an all they had left to send out was the managers mix which was costly at $90/bag! I'm just trying find a cheaper alternative for next yr...
Last edited: May 22, 2014

Where are you located?

I wonder if forage soybeans are needed in the north country. Just plant regular beans about July 1 and hope it does not freeze by bow season opener.

sandbur said:
Where are you located?

I wonder if forage soybeans are needed in the north country. Just plant regular beans about July 1 and hope it does not freeze by bow season opener.
Click to expand...

I see you are in Missouri. My post is not pertinent to your situation.

Do you need them to be Roundup Ready?

wiscwhip said:
Do you need them to be Roundup Ready?
Click to expand...

I don't think so. I could spend some extra time preparing a weed free seed bed. Smoke it 2x with hot gly mix

If you did need RR, your choices are pretty much limited to Eagle brand soys. Delta and Pine had a RR variety of forage bean(I think it was something like Deltapine 7.333), but when they were absorbed by AsGrow(Monsanto) many of their varieties were shelved because they competed with the AsGrow varieties. If you are looking at non-RR, you have a few choices. Tyrone is one of the more popular varieties. Laredo is also another one that has been around since the early 1900's, it was the original "forage" type soybean. If Laredo produces pods that the critters don't eat, they will even reseed themselves, as the seed has a hard black seedcoat that allows them to carry over to the next year. To my knowledge they are one of the few types of forage soybean that possess this trait. If you can get a hold of the guys at OakHaven Forages, they have a couple of promising varieties. They used to sell a few varieties called Bowdacious, Quail Haven, and another type called Top Gun Reseeding soybean. QH and TG are reseeding types. Problem with them is they are either sold out or I don't get an answer when I try to reach them. Their website is ok, but it is still hard to get a hold of someone there. I checked their website and they apparently have their OakHaven Forage soybean blend, which is a mix of Bowdacious, Tyrone, and QH in stock for $35 for a 55lb bag, not a bad price. They also have a type called Lamar, that is apparently "deer-resistant" because they are bitter in the early stages of growth? I wish they stocked half the stuff on their website, I have wanted to try many of their products for a while now, but they are always "out of stock". Donegal and Derry are two other USDA released forage types that see little use, and other than everyone wants the RR beans, I cannot figure out why. Donegal is highly resistant to lodging and gets between 4'-6' in height. They have tested very well in trials in WI. The Evolved Harvest "Mean Bean Tiffypop Blend" apparently has a forage soybean variety named Hinson, don't know much about it. PlotSpike also has a forage soybean, but it most likely is just a common type that is in a pretty bag. Some of these beans are "vining" or climbing type beans and do very well planted with a small amount of sunflowers, EW, or corn to act as a trellis for them to climb up. There are many choices out there as long as you aren't stuck on the RR trait. Good luck and let us know what you decide.

wiscwhip you just saved me about a yr's worth of research!!! Holy smokes
tk you!

It took me a bit to dig through my notes, but your very welcome. I found some info on the Hinson soybeans that EH uses in their Tiffy Mix. Released by the U of FL ag dept, maturity VIII forage bean. It is actually referred to as Hinson Long-Juvenile, as it was bred to encourage a maturity trait that allows it's vegetative growth stage to last the same(relatively) amount of days regardless of day length, and it is not as photo-period dependent on when it flowers and goes into it's reproductive stage.
R

A cheaper alternative would be rr ag beans then broadcast clover on your last spray. Plenty of food to offer without the high prices. 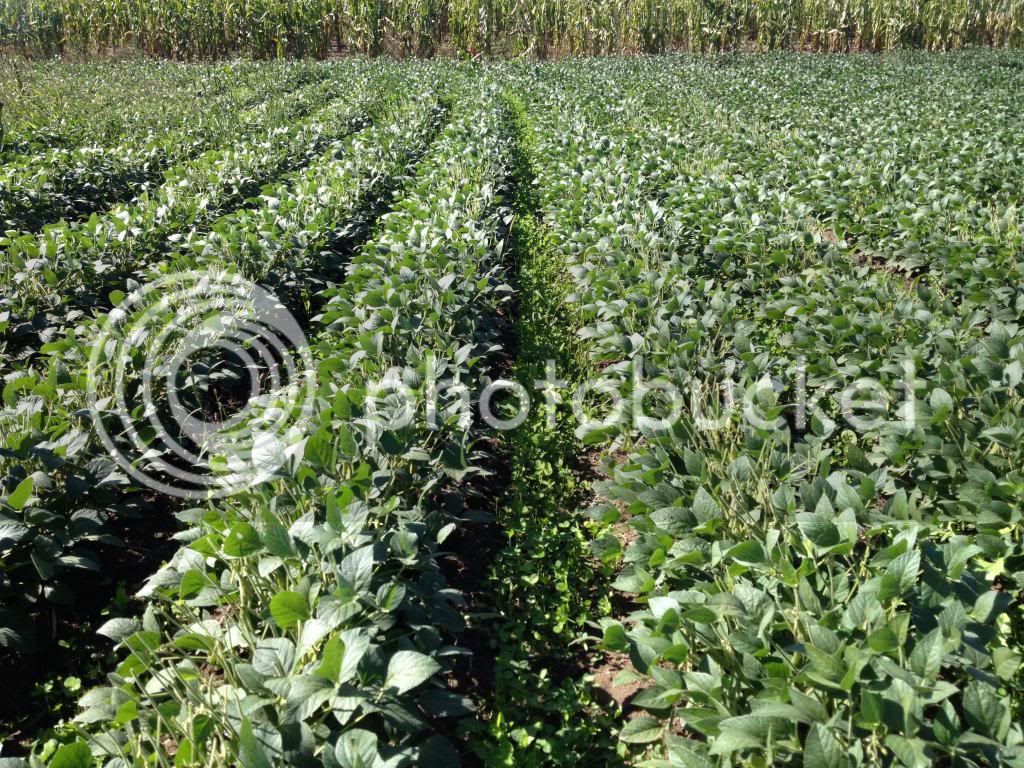 they have some nice products, unfortunately not a lot in stock. bookmarked for sure, great resource whip!

Riggsgwp-> said:
A cheaper alternative would be rr ag beans then broadcast clover on your last spray. Plenty of food to offer without the high prices.

Riggsgwp-> said:
A cheaper alternative would be rr ag beans then broadcast clover on your last spray. Plenty of food to offer without the high prices.

The clover in the beans looks great. How did it look as a clover plot the next spring? I like the idea and plan on making a bean plot into an orchard next spring with clover around the orchard. If your clover looked good the following spring I think you just gave me a way to do it (as long as we get rain after broadcasting seed to keep it alive to the fall).

mikmaze said:
they have some nice products, unfortunately not a lot in stock. bookmarked for sure, great resource whip!
Click to expand...

The guy to get a hold of down there is Steve Payne, he is the brainchild of Oak Haven Forages and is a very knowledgeable guy. He has a BS in Wildlife Bio from MS State and I have read a few articles by him. If one could get in touch with him directly, you could maybe get some answers on the availability of the "sold out" stuff?
R

I planted a fleet farm mix with chicory. Normally I just plant Ladino or red clover cause they are easily available. This spring the clover was growing in rows and there was nothing where the bean rows were. I drilled forage peas and sunflowers into the clover/chicory a few weeks ago as a test plot. Last year when I did this soybean plot I planted it extremely late in the year (July) because it was in a wet area and I only sprayed once then broadcast the clover mix. This was my best plot cause when the rest of soybeans had yellowed and dried mine were lush and green so there was a lot of use in Sept/Oct. Rain was very timely with this plot last year and that's why it looked so good.
You must log in or register to reply here.