Who carries a hand gun

Do you carry a hand gun?

I do either way depending on where I'm going.
R 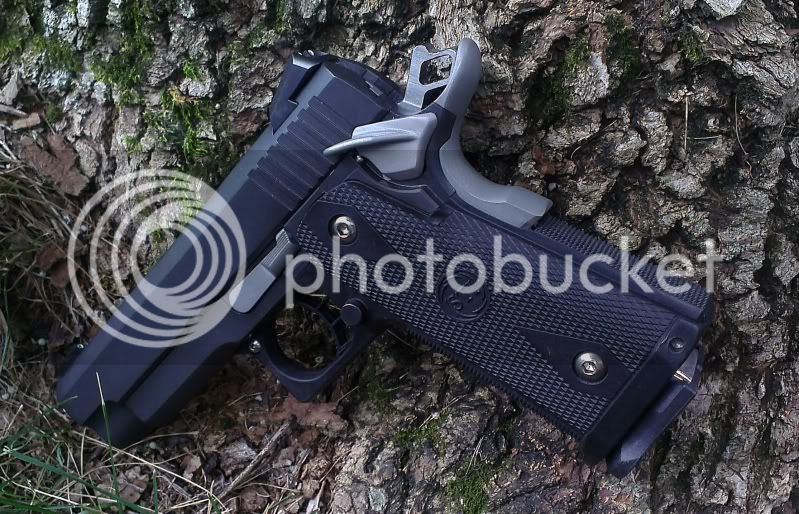 Smith & Wesson Governor with alternating rounds of .45 Colt & 410 with 00 Buckshot

Not very often. I can't at work.

It also depends on what I am doing. I try to when doing things as meeting someone from Craigs list to swap goods.

Used to (concealed) - not anymore.

I'm sort of in line with j-bird on this. I used to carry open whenever I was "in the outdoors" whether it was plotting, hunting, or fishing for just about anything. I have since sold my Ruger Super Blackhawk, so I no longer do so. You get lots of funny looks when you walk around with a Stainless Steel, scoped, .44 Mag with a 10-1/2" barrel strapped to your hip. :eek:o_O I would open carry again if I could get a good deal on another weapon like that, albeit probably a little harder to get away with now that I live in a city instead of a rural area like in the past(even more funny looks). As far as concealed carry, I have a card, but no weapon and I don't see myself spending money on one until I get another hunting handgun first.;)

Concealed most of the time and open when working on the farm. A hippie came driving down the dead end road the other day so I just walked out to the road and leaned up against a fence post not even looking at him but just posing so he would see the pistol. When he came back out and got even with me he rolled down the window and asked me if I was seeing anything to shoot. I replied, "Every once in a while we have a varmint come around that needs shot.":D
Last edited: Jul 16, 2014

I carry while on our property and on our deer lease because Meth and K2 is some bad stuff and makes people do odd things... Can't throughout most of the day but nights and weekends its somewhere around... Ruger SR40c

I wish I could carry while working on the Ambulance. I deal with some really unstable individuals regularly. One time I had a black gal jump in the driver seat of my rig while I was in back attending to a pt.. Tk God the stoned idiot couldn't figure out how to put it in drive before my partner removed her! Only time I have ever heard my partner raise his voice.. I hold a CCW card but carry less than half the time. My carry guns are Glock 23 or kahr cw9

j-bird said:
Used to (concealed) - not anymore.
Click to expand...

I can't carry at work either. Against the rules.

Jordan Selsor said:
I wish I could carry while working on the Ambulance. I deal with some really unstable individuals regularly. One time I had a black gal jump in the driver seat of my rig while I was in back attending to a pt.. Tk God the stoned idiot couldn't figure out how to put it in drive before my partner removed her! Only time I have ever heard my partner raise his voice.. I hold a CCW card but carry less than half the time. My carry guns are Glock 23 or kahr cw9
Click to expand...

Nothing like shooting them with Narcan to save their lives and they turn on you because you just "wasted" their $100 heroin high :confused:

bueller said:
Nothing like shooting them with Narcan to save their lives and they turn on you because you just "wasted" their $100 heroin high :confused:
Click to expand...

Lol yep that is my favorite type of call:)
I had one guy ask me after I woke him up "did I die maaannn" an I said "nope you just looked really stupid"
Of all the drugs I get to administer narcan an D50 are the most fun!

This seems like a good time for a reminder regarding gun safety. Carrying a weapon can put you in harms way. It's more common than most people realize for their own weapon to be used against them. If you carry concealed, make sure your weapon is truly concealed. If you carry open, make sure your holster is at least of level II retention and be aware of your surroundings at all times! Most times it is safer and more productive to be a good witness rather than attempting to intervene.

Also for those of us with children please keep your firearms, especially your loaded handgun, in a safe location. On top of the fridge or under the mattress is not acceptable.

In another area, we had to let someone go because they wouldn't comply with the rule. Can't say I agree with it, but I don't sign my own paycheck either.

MoBuckChaser said:
My Old Mans Bar was in a bad area of North Mpls, just down the road from a hospital. Some of the Ambulance Drivers would stop in after there shift for a bump. This one driver that was a regular came in one day with a huge bandage on his face where most of his nose used to be. Here he was leaning over, working on some drug head when the guy lunged forward and bit most of his nose off! He told my dad it happened so fast, was nothing he could do.

Good cause for carrying if you ask me! So be careful when you lean over the next PCP case!
Click to expand...

I have been directly involved (not as a law officier but as a victim) in 3 situations where armed criminals with guns took over (1 armed robbery, 1 hostage, 1 disagreement) where a gun was pulled and changed everyone's landscape. I used to drop the bank deposits off for my Dad's bars at the bank night deposit after 2 am ... interesting the people you meet. Have had my residence broken into twice by burglars. Worked in enough bars & lived in enough areas where guns were pulled and actual shootings took place on a regular basis. In one 6 month period there were 2 murders within 6 blocks, 17 murders within 1 mile.

Lived in the Milwaukee area and have watched violent crime spiral over the last two decades under the idiot Mayor Barrett ... his solution is call an 800 # if you see a crime so the Police can respond ... 2 weeks ago a woman was stabbed by her husband and the paramedics arrived in 5-10 minutes ... the Police arrived 30 minutes later and she had already died because the Paramedics could not treat her until police arrived.

Our violence problems in society are not a Policing problem, but rather management problem ... the wrong people at the top of Gov't, Courts, & Police forces.

I don't carry, but I'm interested in it. I've been doing some research and in the course of that found http://lawofselfdefense.com.

I read his book http://lawofselfdefense.com/product/the-law-of-self-defense-2nd-edition/

I found it helpful in understanding the conditions REQUIRED to prove in a court of law that you've fired a weapon under self defense. It's more than just "you think you're right", and I highly recommend the book. I'm taking his seminar next month at a nearby range; should be interesting.

If you're not mentally prepared to kill someone to save yourself or another - you shouldn't carry a gun. The moment you have to draw on someone isn't the time to come to terms with that outcome, that hesitation could get you killed.

Our "instructors" harp on the idea of "stopping the threat" because that's the legal jargon you need to speak when you've used lethal force in our society. In reality a wounded aggressor is an angry one and adrenaline makes things worse before they get better. Add drugs to their chemistry and you need to shut the central nervous system down or they'll keep on coming. People can survive a stomach wound for several hours, with a punctured lung, you're still going to have some time before they slow down. With a leaking heart or liver, the oxygen in the brain runs out from low blood pressure and they'll pass out. See where I'm going here?

It's very empowering to carry a gun. There's not much that concerns me when I see shady characters around, but situational awareness is my greatest defense. Not being part of a bad situation is the best solution. I carry a gun because leaving fast enough isn't always possible. 99% of people who carry will never draw their weapon. I used a handgun twice in self defense before ever getting my permit - none since. I like it that way.
You must log in or register to reply here.

Benchrest Rifle - Stolle Panda 6PPC - with all the needed tools to load and shoot in competition.

Has/Does anyone use seed from the "Big Name Brands"?
2 3