I am going to be picking up trees from Itasca Greenhouse on May 9 and planting that weekend. The first goal is to screen off a 1.5 acre field from the road and also screen off the cabin from the road, see image below. It will be 3-4 rows of White and Norway spruce with staggered 10 foot spacing.

I will not be spraying with gly, most of the grass was cut pretty short last year and I would rather have the grass helping to protect the trees for the winter even if it gives them some competition starting out. Also, I would have to make it there these weekend to spray which isn't going to happen.

I will be planting them using one of Jim Timber's plug planting tools. I think I will need to do some shoveling for the 77 and multipot sizes but that's the way it goes.

The tree quantities, type and size are:

I will have some bud cap netting for the white cedar as well. Even with a down deer population if the one deer finds a group of the white cedars they will probably look for the others.

I also have 36 hybrid poplar that I have been growing at home that I will throw into part of the screen to get something going faster. But it looks like I will not be able to get those transplanted until May 24th. 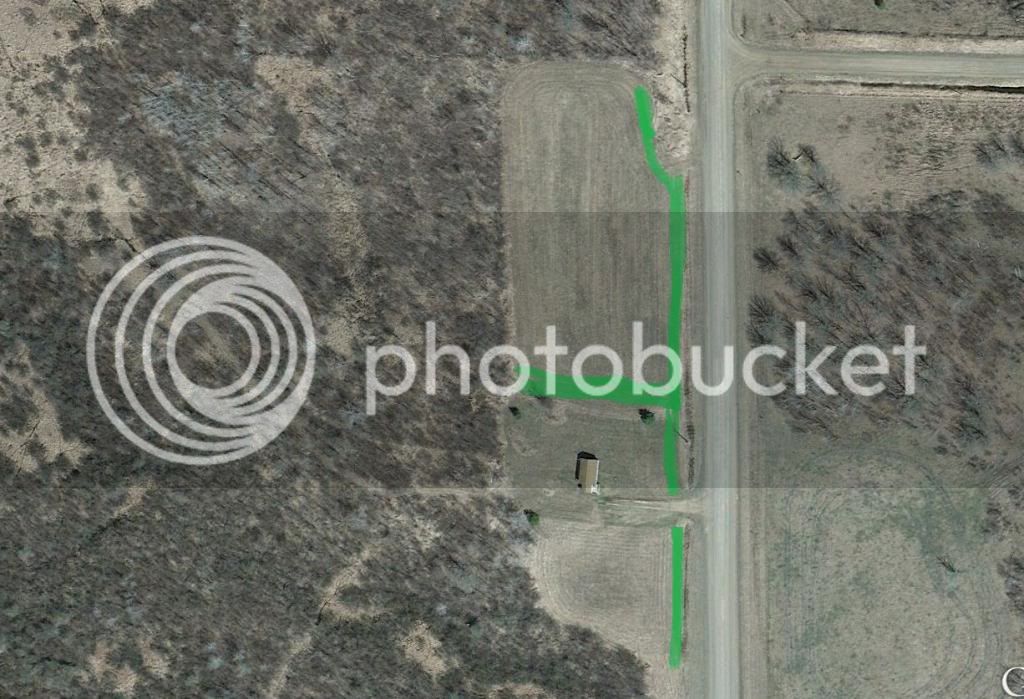 Screening a field is painstakingly slow so I think having a row dedicated to hybrid trees is a very good plan. I have a 3 row screen of cedar, black hill spruce and Nanking cherry but this year I'm adding a fourth row of hybrid willow. I'm very inpatient so I'm hoping the hybrid helps with that. Good luck.


That makes sense. I will have to figure out some spraying. Maybe I will get a grass selective herbicide to spray after they are planted since I won't get it done with gly before the 9th.

This summer and next year I am hoping to get some winter rye planted in some areas to be screened in future years like you have mentioned doing before. I won't need any more screening on this 40 in the future, even though I will want to add more evergreens for bedding and travel areas. But on my brothers land we plan on planting 1,000s of trees over the next few years.
D

Stove pipe and a hand sprayer after bud break. Just screw a piece of wood in the pipe to give yourself a handle. I did 1000s of trees that way before I smartened up a little.
Grass spect herbicide is expensive, nothing wrong with glyphosate. Next spring you can just spray over the top of the trees before bud break with glyphosate, just make sure it doesn't have surfactant

All good suggestions so far.

You could even consider spraying with gly the day you plant. As soon as its dry you are safe. I've planted an hour after spraying with no ill effects. Grass is the worst, and DON'T mow grass to reduce competition. The root mass of grass will get thicker and do more damage.

I have evergreens planted in RCG (before I knew better) that are 6 or 7 years old. They have finally started to pop out of the grass. I hope this year they really get going.

dipper said:
Stove pipe and a hand sprayer after bud break. Just screw a piece of wood in the pipe to give yourself a handle. I did 1000s of trees that way before I smartened up a little.
Grass spect herbicide is expensive, nothing wrong with glyphosate. Next spring you can just spray over the top of the trees before bud break with glyphosate, just make sure it doesn't have surfactant
Click to expand...


I was thinking about something to cover them while spraying but didn't get to the point of figuring out a stove pipe, thanks for the info!

I had done some searching about spraying on dormant trees as well. The idea of spraying 100s of trees with something that could kill them is scary but it looks like it should work. Hard to say if I could work out the timing on that in the late winter/early spring due to work and living 3 hours away.

John - thanks for the info on spraying the same day. My dad had mentioned that since that is what they have done for planting crops before but he wasn't sure if it would work for trees since the grass may rub could against the tree needles. He was thinking we would want to wait a day or so for it to be absorbed but if a few hours works that is awesome!

There is no reed canary to worry about here, but some of the other areas we want to plant in the future have quite a bit of it. We are going to start spraying that reed canary with gly 2-3 times in a summer and then I was thinking planting winter rye to suppress future growth, and then plant plugs in the winter rye in following year. We may try some burning next spring as well in those areas.

Careful with a stove pipe. If gly drips off it and on the tree as you remove it you"ll kill the tree.

5 gallon bucket with no bottom and a slot to slide it away from the tree will help reduce that risk.
D

Bill said:
Careful with a stove pipe. If gly drips off it and on the tree as you remove it you"ll kill the tree.

5 gallon bucket with no bottom and a slot to slide it away from the tree will help reduce that risk.
Click to expand...


I've sprayed thousands of trees this way, a drop of spray isn't gonna kill the tree. Your back will appreciate not bending further down, and a bucket will drip spray just as easily. Especially if there is a opening in the side of the bucket, you hit that hole with spray, than the tree will be done. Spray will also get on the edge of that side cut.

You only have a 100 trees or so, you could just spray away from the tree.

We had a neighboring ag field turned in to hybrid poplar field I was blown away how fast those little suckers grew in the first year. I would make sure you plant those in the area that you need the screening in the most cause there going to grow fast.

Here is a screen that I planted almost 25 years ago. Actually the picture is a few years old. Light soil, so I used jack pine, cottonless cottonwoods, and some scotch pine.

there are a couple of HP in with the cottonwoods.

I have also used jack pine and white spruce for a field screen.
You must log in or register to reply here.