Stock Market is the bottom in?

Just imagine if interest rates do go to an amount where one can make money with less risk?

i don’t think that can be all bad?

I remember getting 7% on a CD. You don’t want that kind of environment again. It comes with runaway inflation. 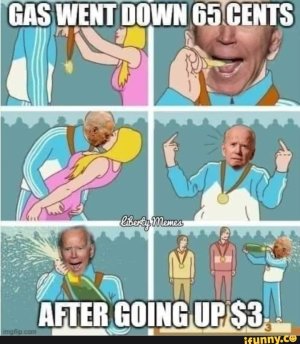 My grandmother had 15% CD 7% is nothing compared to how bad it could get.
B

bwoods11 said:
Well what are you doing ? Biking to work ? Why do Democrats tell others to do their fair share, but they don’t ? Taylor Swift, Leonardo D, Al Gore, Joe Biden? All riding in luxury planes, yachts, private jets, extra homes?
Click to expand...

First - let's not make this out to be an overnight elimination of gas, diesel, and jet fuel. That won't happen. The change to greener sources of energy will be phased in over time. I just today read a good article in a business magazine ( far from libera l) that said governments all around the world are taking steps to phase into more environmentally friendly energy sources - so it's NOT just here in the U.S. as a Democratic plot. The magazine article went on to say that businesses worldwide are gearing up for greener ways to manufacture AND transport goods. The executives from many companies want a healthier planet for their kids & grandkids ........ so it's WAAAAY beyond Biden, Taylor Swift, Leo D. and other of your targets. BTW - don't all those conservative CEO's jet around in private jets and get chauffeured around in big limo's ??? The word "ELITES" doesn't only apply to Dems, friend. There are WAAAY MORE conservative CEO's, COO'S, CFO'S, and CIO'S than there are liberal ones. When the Koch Bros. openly bragged about donating $800 million to Republican campaigns last election cycle (and that's just 1 set of executives!!!) - and add to them Sheldon Adelson (sp?) and a LONG list pf other CEO's that openly sent hundreds of $$$ MILLIONS to the Republican party ........ I'd say those gold-plated billionaires are just as guilty as any lib. Do THEY ride bikes????? I'm quite confident that all those conservative CEO'S & executives are flying comfortably in their private (or shareholder-paid-for company) jets. I don't know any working folks - D or R that have their own jets. Or limo's. Do the big country music stars ride bikes??? How about the Nascar stars???

I suspect that as time goes on, more and more people of all political persuasions will be going "greener" in one way or the other.

Several companies are already installing nationwide electric charging stations at Pilot truck stops and other big chains of gas stations. Are those CEO'S stupid??? Can they not see the future??? They see it coming and are getting in early. Will all gas & diesel disappear?? No - but the demand is going to go down - and these companies are making smart moves NOW.

And ..... there's only so much atmosphere surround the earth, and it's not all that thick. Consider that there are BILLIONS of people around the world driving vehicles that pump out millions of TONS of carbon-based pollution every year. There's no exhaust vent to let that crap float out to space. It ALL stays right here - trapped. How long do you think that policy can last without devastating consequences??? Forget politics for a minute. If most countries are on board with going greener in many ways - is EVERYONE in the world crazy??? Even China is starting to clean up their act because they have such bad smog and air pollution there. We're supposed to be the "smartest" animal on the planet - yet what other animal trashes its home environment?? The world's oceans are garbage dumps for cruise ships, cities, countries, and INDUSTRIES. How long can the oceans produce all the fish and seafood we need to eat with plastics, chemicals, and garbage polluting them??

b116757 said:
I suspect they could be trying to tank the dollar completely to adopt digital currency their absolute wet dream of controlling the people. idk hard to believe even Democrats are this dumb there has to be some end goal they are striving for with this lunacy.
Click to expand...

Why do you think crypto is all a Dem plot???? Crypto came in long before Biden. I'd wager the founders of e-money are Republicans. Most business owners are. Same as most Wall Streeters are Republicans. Who deregulated the financial services industry in the early 2000's?? George W. Bush and Cheyney - and what happened when the oversight agencies were neutered / de-funded?? The financial meltdown in a wild-west environment on Wall Street. Let's "deregulate" all the banks and take away the security cameras, alarms, and guards. Sound wise to anyone?? But that's what happened when the investment / financial services industry was deregulated by Bush/Cheyney. Without policing agencies to regulate money managers - who here is equipped / trained enough to safeguard your life savings 24 / 7 ??? Anyone out there great at forensic accounting??

” Most Wall Streeters are Republicans”. You might want to check on that one. I believe it’s just the opposite. As far as business owners that’s 50/50 I’m sure. Be careful where you get your news and info from.

Digital currency is the end of freedom. Just imagine if the vaccine/lock down communists can shut off your ability to buy anything because cash doesn't exist? Were you geotagged at an unapproved protest? Banned. Refuse to take the untested mRNA monkey pox vaccine? Banned. Saying bad things about big brother online? Your electric car will be disabled. Buying too much non-bug protein? No more groceries for you.

We got damn close during rona. They printed so much money that there wasn't enough physical currency to move it. Member the coin shortage?
B

Sheepeople will never see the obvious only what government tells them. I was going to add more to my post but really that says it all. 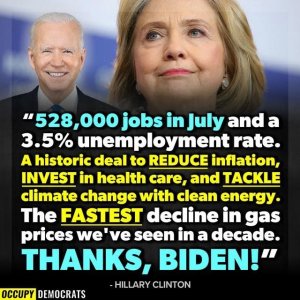 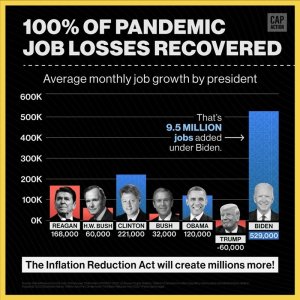 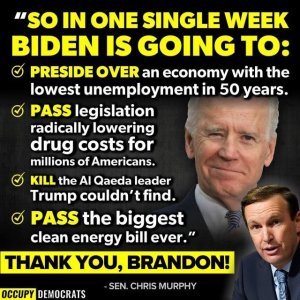 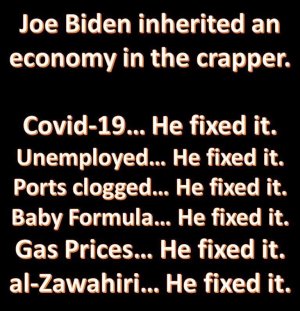 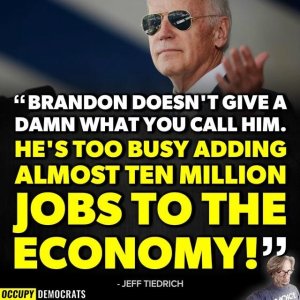 It’s interesting to be meowing about global warming and our beloved government on this site.

They can’t manage their own land.

Was not a study published from a Scandinavian country that the fastest cheapest way to confront global warming was to plant trees?

Me thinks them hybrid oaks are the answer!
B

Buckly said:
Be careful where you get your news and
Click to expand...

Right back at ya. Fox's own highly-paid lawyers said in federal court that many of their shows are "opinion TV, with sensationalized anchors." Their statements were Fox's defense in the Dominion lawsuit because Fox kept saying that Dominion was "rigging" their voting machines to favor Biden. False claims admitted to by Fox's own lawyers when they said those shows are "opinion TV - not statements of fact."

I don't recall any lawsuits against ABC, CBS, NBC, BBC, PBS, Bloomberg, Reuters, USA Today, Associated Press, etc. for broadcasting outright LIES. And many people sucked those Fox, OAN, and Newsmax lies right down ......... because of what THEIR political talking heads were spoon feeding their followers. Seems Mr. Jones has been convicted by a jury for his heartless, BS-laden claims that the Sandy Hook shooting and multiple deaths were all a made-up lie. We see who the liar is, and he's been fined $42.5 million to be paid to the parents of the murdered Sandy Hook students.

So ....... to take your own advice - maybe you ought to multiple-check your news services.
Last edited: Saturday at 8:37 AM
B

All wildfires ARE NOT on U.S government land. Many are on private land, started by idiots who don't heed "no-burn" bans. Some by "dry lightning" strikes too.

Maybe we should get rid of all those federal, state, & local "big government" firefighters, and just let any fires burn ........ taking out homes, farms, vineyards, orchards, and many lives????
B

Angus 1895 said:
Was not a study published from a Scandinavian country that the fastest cheapest way to confront global warming was to plant trees?
Click to expand...

George W. Bush said the best way to fight forest fires is to cut down all the trees and brush, so there's no fuel. Which is it ..... plant trees or cut 'em all down?????? Which sounds more sensible to all of you???

Bowsnbucks said:
George W. Bush said the best way to fight forest fires is to cut down all the trees and brush, so there's no fuel. Which is it ..... plant trees or cut 'em all down?????? Which sounds more sensible to all of you???
Click to expand...

You sir are clueless when it comes to good sound forestry. Clueless.

I will leave it at that.

Another thread gone to crap with tribal politics. Guess I'll cross this one off my list. And yes I'm as opinionated as everyone else and not likely to be convinced on some internet thread otherwise on my beliefs

b116757 said:
Sheepeople will never see the obvious only what government tells them. I was going to add more to my post but really that says it all.
Click to expand...

That's for sure. They just believe whatever their pandering political leader says, regardless of objective truth. They create conspiracy theories from while cloth. They mistake delving into extreme web sites for research. They believe those who have different ideas from them have evil intent for the country. Rather than considering an idea for its intrinsic value they first ask "Who's idea is it?" and that determines for them the value of the idea.

Sheeppeople live on both extremes of the political spectrum.

Mortenson said:
Crying about internet threads being derailed is as annoying and meaningless as threads being derailed. I could cry about being the last dermtech bag holder at 8 bucks but no one likes a whiner. I just need to find out what stocks Queen P's hubby is holding.
Click to expand...

Your not the last. I still have 3500 shares and as confident as ever. Well maybe not as ever but still confident.
You must log in or register to reply here.

How to improve river bottom ground?

S
What will the impact be now that whitetail deer are confirmed carriers of Covid.
2