I planted 2 acres of beans in a plot this weekend. Deer usually wipe them out so this year I set up my first E-fence on a plot. Though I would give it try. Fenced a 20yrd x50yrd area.

Will that keep bear and coon out? Planted an acre of corn last Friday I want to E fence but its not the deer I worry about.

bat man said:
Will that keep bear and coon out? Planted an acre of corn last Friday I want to E fence but its not the deer I worry about.
Click to expand...

I have had some luck keeping coon out of my sweet corn with a double strand at 10 and 24. Not to many bear in my area.

Checked out the bean plot that I planted(Broadcasted) Memorial day and rotated the e-fence battery. Beans popped threw. Were wiped out on the side closest to the woods for the first 10 yards ,not touched inside the fence and about 50 % on far side of the fence and away from woods.

Bear don't seem to mind e-fence when the loot is good.

We couldn't keep them out of the camp dump with it. They'd pull it down and keep on going.
B

Might try hangin sardines wrapped in alum foil along the fence. It will break the coons from suckin eggs but not sure about the bears. A hot charge in the mouth might deter them though.

E fence worked great. Out of the 2 acres about 1/2 either got flooded out or the deer mowed them down . I disced the lower areas and the really eaten. Planted a blend of GGT,Rape & Kale in that area. The beans out side the fence were about 6-8 inches and sticks ones in the fence were 3 times that and bushing out. Can't believe I didn't try it before. Still not sure when I should take the fence out. Any suggestion?

The weekend before you plan to hunt it.

It depends, do you want the soybeans to be used for browse or are you trying to maximize pod growth? If they are being heavily browsed and your worried about losing pod production I would wait until they just start to yellow. If you want them browsed I would give them a week and then remove the fence.

I did my first e-fence this year with 3 ac of beans/corn and it worked great. This was what it looked like a month or so after planting. 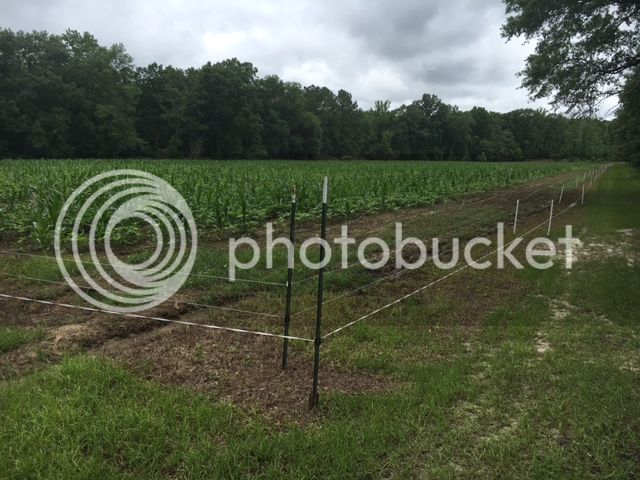 And this was a couple of weeks ago when the fence came down. 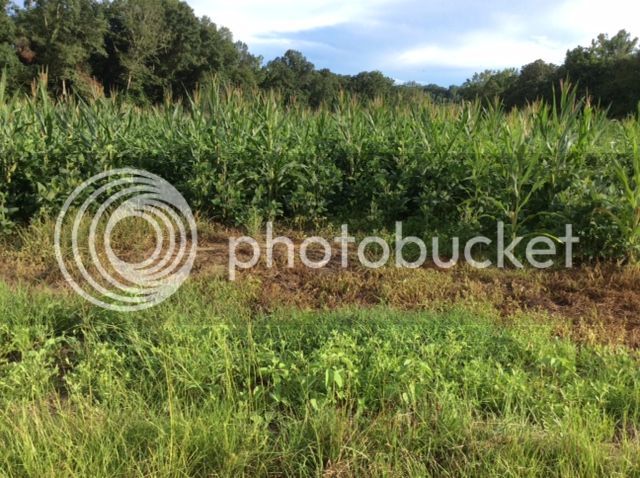 I'm surprised that worked but obviously it did. I have one very similar but I used 3 strands on both section and it's much higher on the back row.
B

I did the fence exactly as the Gallagher site said to. I did not think it would work either, but apparently the design is supposed to mess up their depth perception so they won't jump it, even though they easily could. All I know is tried beans on this field twice and never had anything but stems and as long as the fence was up not a one crossed it in almost 2 months.

This was my first year with fencing also. I was very skeptical of it working but after seeing deer on several occasions walk the entire perimeter then give up I'm sold. I can see the two acre plot from my house so I get to see these interactions frequently. I have even witnessed a few take the fence on with their nose.... Fence won. I'll post an update once my corn gets ears on it.

Sent from my iPhone using Tapatalk

I appreciate these examples - I have never put up an e Fence yet. Each of your plots look good and the difference is obvious.

Thanks for the photos and explanations.
You must log in or register to reply here.

The perfect NoTill way to plant a corn plot??

Wednesday at 11:18 AM
Troubles Trees