Yeah, I'm a saw addict. I currently have 8; 5 functional, 3 not or in unknown condition. One of them is supposedly sold to a buddy who's down his only saw, but that still leaves me with 7. :D I even threw out an old poulan 330 top handle because it was too much of a basket case and what the hell do I need an arborist saw for anyway? I don't own a bucket truck.

The rest of the collection is some old McCulloch 80cc's and an antique Homelite, then I have a little 35cc Echo I use for light limbing and trail maintenance. I got that one because it had the highest horsepower in a 10# package back when my neck and back wouldn't tolerate running the 15# jonny for more than a few minutes. That little bugger surprised me after removing the catalytic converter and limiters on the needles - she's a screamer! :cool:

Since threads suck without pics... 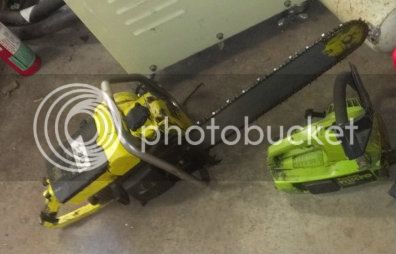 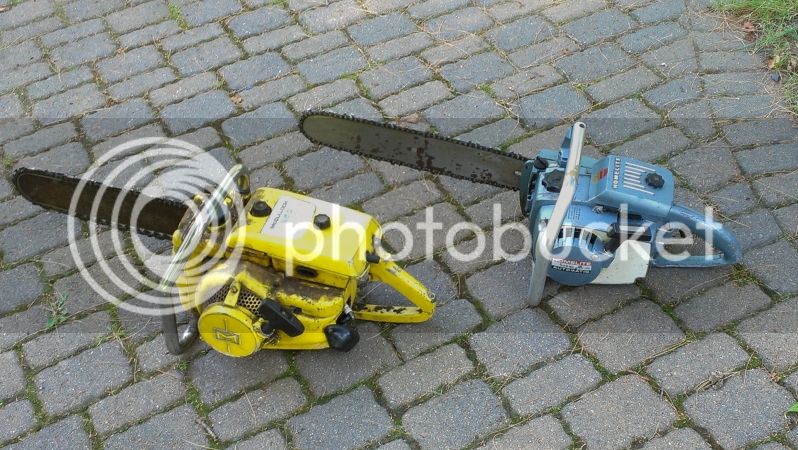 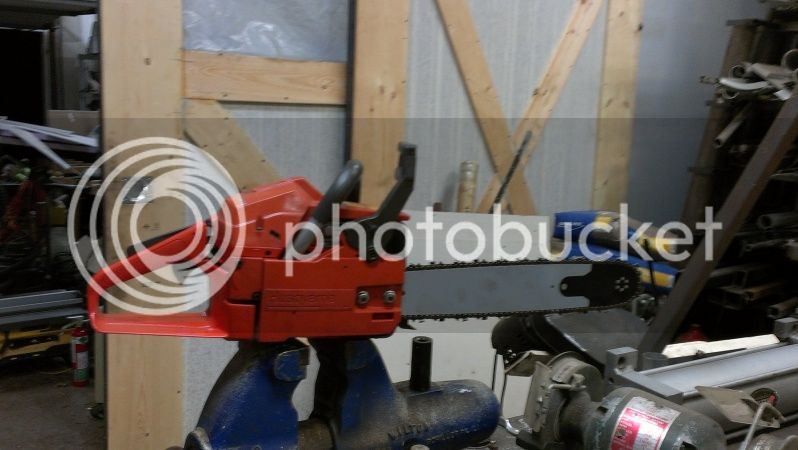 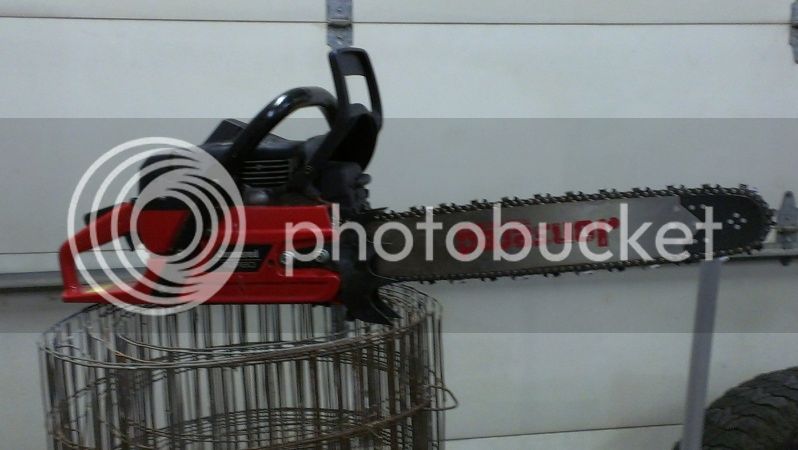 What saws do you guys have?

Only 1 a Stihl MS 261 that I got a 2 years ago. It replaced a Jonsered 631 that was 30+ years old when she gave out on me. I couldn't believe how much of a weight difference there was in the 2. But we are talking a 30+ year difference. I didn't feel like running to the shed to take a pic.

I've got 2…a 12 year old Husqvarna 350 and a Stihl 044. The Husky is a strong runner and great for limbing and bucking. My bother-in-law bought a 350 3 years ago and his saw is no comparison to my 350. It feels cheap and light compared to mine. It's also less powerful. The 044 is a heavy machine, but powerful. One random thought…sharpening chains is something I've always wished I was better at, but hard for me to master. 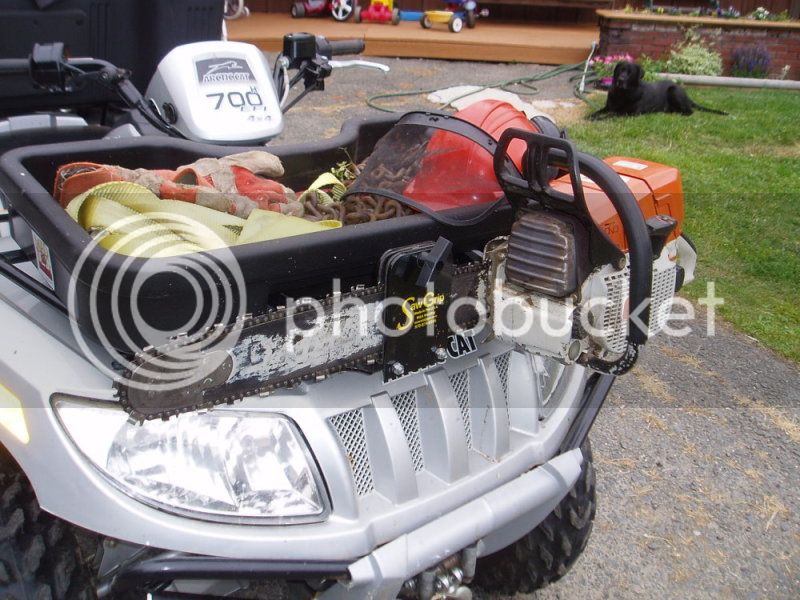 I've got a Stihl MS-250. Great land owner saw. It's light enough you can use it without too much fatigue. It's big enough you can tackle almost anything you've got in front of ya. I picked mine up from a full service dealer in town. They have a machine that sharpens chains for ya. I think they said $2-4 per chain to sharpen. It sure made quick work of Operation Sunlight when I planted trees last spring.

I've got a stihl ms 390 and a Husqvarna 570. The 390 is good for the smaller stuff but when I really need to get into a bigger tree I go with the 570. That thing flat out cuts. It'll burn threw a tree quicker then you can think. Buy yourself a good pair of chainsaw chaps. They are worth they're weight in gold as far as I'm concerned.

wklman said:
I've got a stihl ms 390 and a Husqvarna 570. The 390 is good for the smaller stuff but when I really need to get into a bigger tree I go with the 570. That thing flat out cuts. It'll burn threw a tree quicker then you can think. Buy yourself a good pair of chainsaw chaps. They are worth they're weight in gold as far as I'm concerned.
Click to expand...

So Wink......How is that Stihl on the Saguaro Cactus? ;) Hard for me to understand how you can do all the travel and work required. You gotta run a full schedule.

Sharpening chains isn't all that hard as long as you have a good sharp file. Back in the day I use to cut fire wood for 3 homes, mine, the folks and the inlaws. Cut with a dull chain and you'll learn fast how to do it right. I tried all the different jigs and templates but found it easier to free hand it. I just over tighten the chain on the bar and go at it.

I have a pretty good support network foggy. I keep a truck up in Minnesota with all my stuff in it. What I can't get done when I'm there I hire out to either my neighbors or my family to do. I also get a lot of vacation time so I'm up at least twice a year for 2 weeks at a time. It also helps being single, if I was married I most likely wouldn't have the property.
B

1 saw - Stihl MS-390. I cut a PILE of firewood each year - all hardwood - and it's more than adequate. I used to have a Homelite super XL, too - but it saw it's day. I keep 3 chains at the ready, saw tools in their own tool box, and sharpen my own chains. I usually touch up with the file during a long day of cutting or just swap chains. Dull chains are a P.I.T.A. and make the saw work harder - and my day longer! :mad: No dull chains !!!

My father retired his wood stove last year right as I started to get into habitat work. His Stihl 028 was getting pretty anemic. After getting a nice little bonus last spring, i picked a husky 562xp with the computer controlled carb. I am quite pleased with it. I was tempted to get a bigger saw but it is as big as I need. I like my silky hand saw to.

I was getting close to buying a 550xp for the same reason. I have the big Jonny for cutting large trees, and the mid size 51 got the job done on most everything else at 1/4 less weight. The new 357xp will be a big improvement in speed and power in the same weight class, but half the price of the 550xp. :)

I owned a Stihl 031 AV until last fall. Was a real nice saw. Musta owned it for over 30 years. Reasonal weight and cut like a banshee. Mostly free-hand filed my own chains. Goes pretty quick.....and makes a HUGE difference. Recoil and a coil were evidently bad. Sold it quickly on a CraigsList add. Just too heavy for my back anymore.....and I don't make much firewood these days. Bough a new 180 Stihl. Love it.

wklman said:
Buy yourself a good pair of chainsaw chaps. They are worth they're weight in gold as far as I'm concerned.
Click to expand...

Stihl 460 for the big stuff
Stihl 200T for everything else (about 90%)
You must log in or register to reply here.

Habitat Advancement in a 2022 Economy