April 1st, 2014
Took a quick lunch break walk on my neighbors. I pushed through a staging area that had some serious rubs in it and started working my way back up to the field edge. the field had about 9-10 acres of standing corn all winter. I was surprised that i hadn't found a shed at all and was on my way back out when i came up through a spot that I always expect to find sheds every year...i never do. its a brushy little outside corner of the cornfield that has a little knob, its also on the prevailing downwind side of most of the field....always seems like a good spot for a buck to check out the field before entering.
I took the left branch on a main trail and was just short of the crest of the know when i looked right down a faintly worn trail. At first i thought i was seeing an odd shaped branch with a fork in it...i took a few more steps towards it and saw the veination....SHED!

just before snapping this pic i noticed presumably the match laying just a few feet behind.... 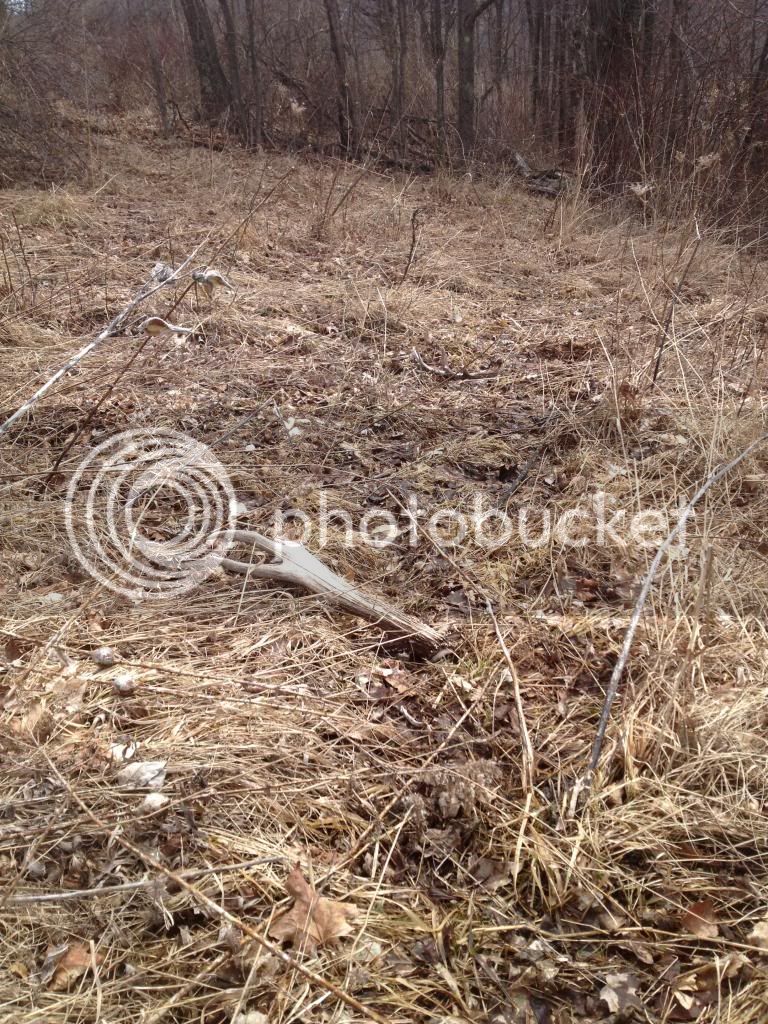 a unique looking shed for sure... 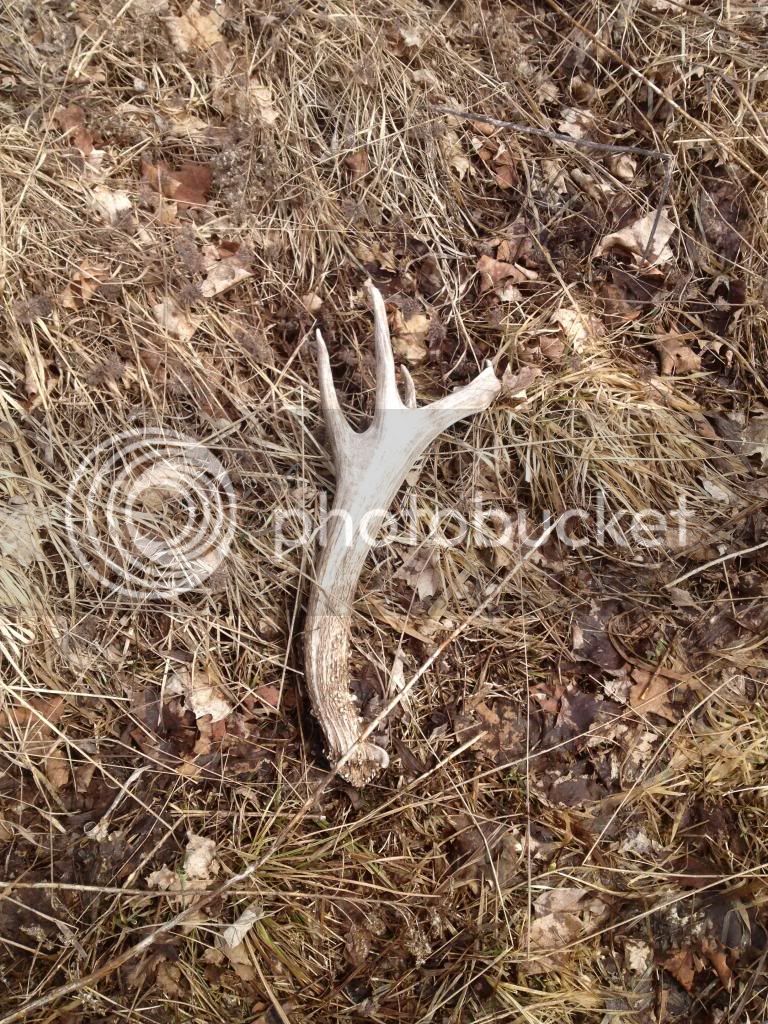 the set from the opposite direction 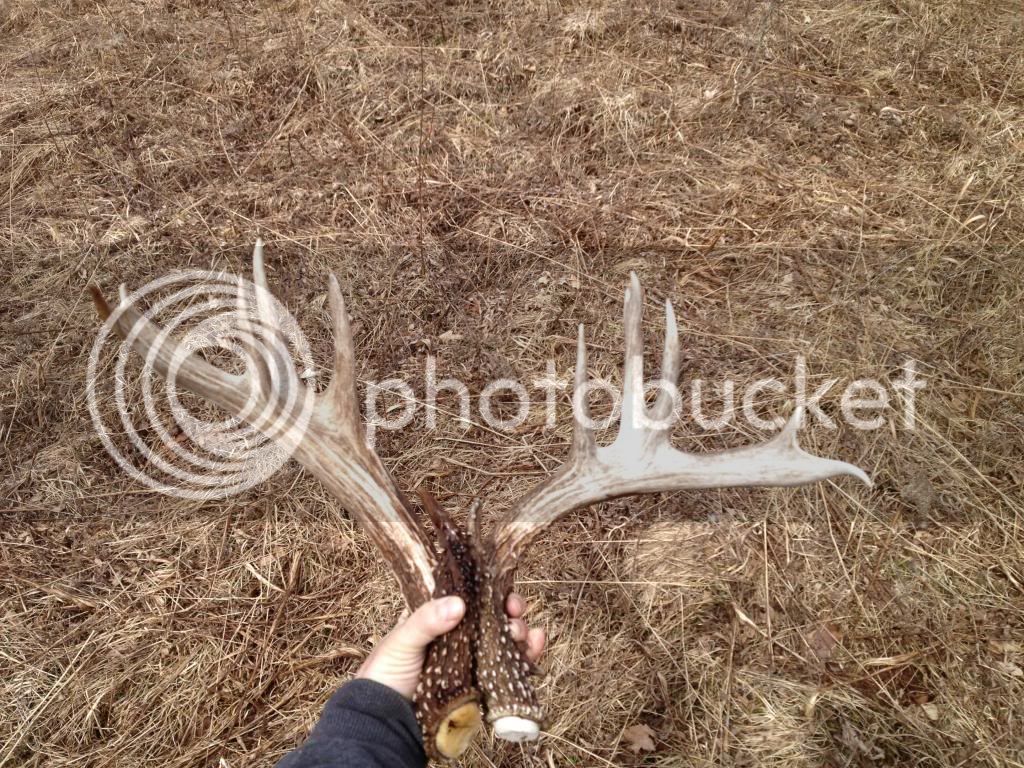 back at work behind the office building 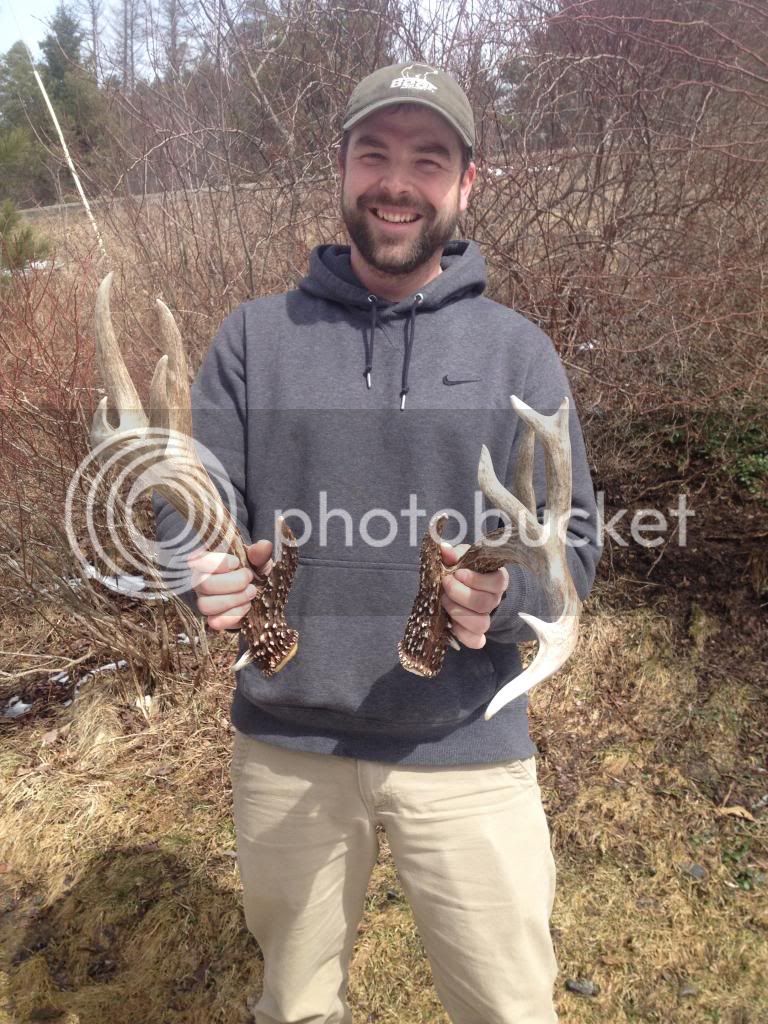 I couldn't believe that there was a buck like this in the area that I was not aware of! I've never seen him before, no trail cam pics, no previous years sheds...nothing. And judging by the character of these antlers I would have taken note if i were aware of him!

As i was walking back to the truck i was admiring the sheds as I noticed the right antler had an odd shaped base and familiar sticker...i almost couldn't believe it.... i thought this could be the sheds from a buck i knew quite well and have 2 previous years sheds from...but this set is drastically different other than the bases, brows and stickers near the bases. I have the right antler from 2011 when he was a 3 yr old 125" mainframe 9 pt with a 1" sticker between the base and the brow, I also have his left antler from 2012 when he was a 4 yr old mainframe typical 10 point that was in the mid 140"s.....when i got home i pulled the other sheds out of the bone pile and compared. I see enough similarities in the bases, brows and base stickers to feel confident it is the same buck.

in 2011 i had no trail cam pics of him, but had a very lengthy encounter with him on the evening of November 9th which almost ended with me getting a shot at him. Then on January 25th of 2012 I took a little lunch break walk and picked up his right antler (about 200 yds from where i found the set this year).

In late may 2012 I began getting trail cam pics of a wide soon to be 10 pt on my property. As his antlers progressed it became apparent that this was the buck I had the encounter with in November and picked up the shed from in January. He turned into a mid 140's 10 point. I continued to get pics of him throughout the summer of 2012, but he was not an everyday regular to my property....i knew my property was probably on the periphery of his core area. As September rolled around he disappeared. On the morning of November 2nd, 2012 I was in my stand when I spotted a big buck across the property line on my neighbors about 120 yds out in an old overgrown pasture. He was watching a two yr old 7 point make a scrape just 30 yds below me. I put the glasses on him and sure enough it was him. He eventually put his head down and trotted off into a doe bedding area on the neighbors. I would not see him again until he started showing up on trail camera in my brassica plot during our Firearms season (i dont hunt rifle season on my property). I felt like I might get a crack a him in our late archery season if he survived rifle season and kept this pattern up. Then he showed up in front of my trail camera 10 days before late archery but after rifle season has ended, sporting only one anlter....it was december 16th and he had shed one antler already! He dropped the other side a little over a month later. I looked all over the place for his sheds and was only able to come up with one....his left side on Easter sunday of 2013.

Over the course of summer 2013 I never did get any pics of this deer...i figured him dead for one reason or another. Upon finding this set of sheds and putting together the pieces of the puzzle I believe that shortly after shedding his 2012 antlers he may have been struck by car or somesort of other skeletal trauma and that is why his rack grew so differently in 2013. Possibly the injury was profound enough when combined with aging he shrunk his core area down further and I no longer had him coming over to "my side of the hill".

i'm anxiously looking forward to this summer to see if i can get any velvet pics of him and see what his antlers will look like this year as a 6 yr old!

Great find. He should be a awesome buck this year.

I'd be smiling ear to ear too, if I found a pair of sheds like that! Good Luck with him this year!

Yesterday at 3:33 PM
Bowsnbucks
B

Yesterday at 4:40 PM
Bowsnbucks
B