Don't post on here much due to not knowing much or being as involved as most of you in habitat improvement. Not that I don't want to just don't have the land or time it seems but thought I would post this. Thought it might get you guys excited knowing its almost time. Our state has an expanded archery season that starts early. I remember someone telling me it took them 3 years before they killed a deer with a bow. I thought wow that's a long time hear it is my third year. Harder than I thought. Opening night after long windy day of hauling traps I was thinking of staying in front of AC and relaxing. It was 78 degrees on way to stand calling for severe thunder storms around sunset. But I knew I was going. No action for first two hours when I hear something about quarter till sunset. I am hunting same tree I passed doe that had two fawns first week of season last year. But had been getting no pictures of fawns and a couple does in area. I'm about 15 yards off old trail I think they are using and have what seems to be a year round scrape or something where the dirt is all dug up and most deer seem to stop and smell it. Wind direction is not great for this hunt(southwest), but to be honest I usually think about the wind but not one to not go if it isn't right . Anyways a doe steps out into opening but is walking north to south and the trail runs east to west. Better direction to come from wind wise but she is just crossing the trail walking directly at me. I draw back and here is where my amateur hour comes in. I've heard people call it deer panic instead of target panic. I can relate cause shooting at a target in yard nearly never have target panic but the two times I have released an arrow at a deer my mind seems to go screwy and I don't remember where I put pin. The doe walks through trail directly at me no shot. Second doe right behind her I move full drawn bow to her no shot. First doe is probably 5 yards from my tree in an opening still quartering to but not too bad. She stops and looks up directly at me I put pin somewhere, lol, as I say tell myself over and over pic a spot just don't remember, and release. I knew it was a steep shot and wasn't sure. Got down and checked arrow looked like dark kind of milky or dirty blood that smelled. Figured it was some sort of gut or liver. Waited half an hour and walked the 30 yards I saw her run before she disappeared. Not much blood and always heard give gut shots a long time. So I backed out and waited till morning. Went to the point where I last saw her and saw her white belly not but 10 yards away. Shot was brutally high (just below spine) but such a steep angle exited mid body. Learned a lot of stuff not to do as usual, but it worked out. 110 pound doe. 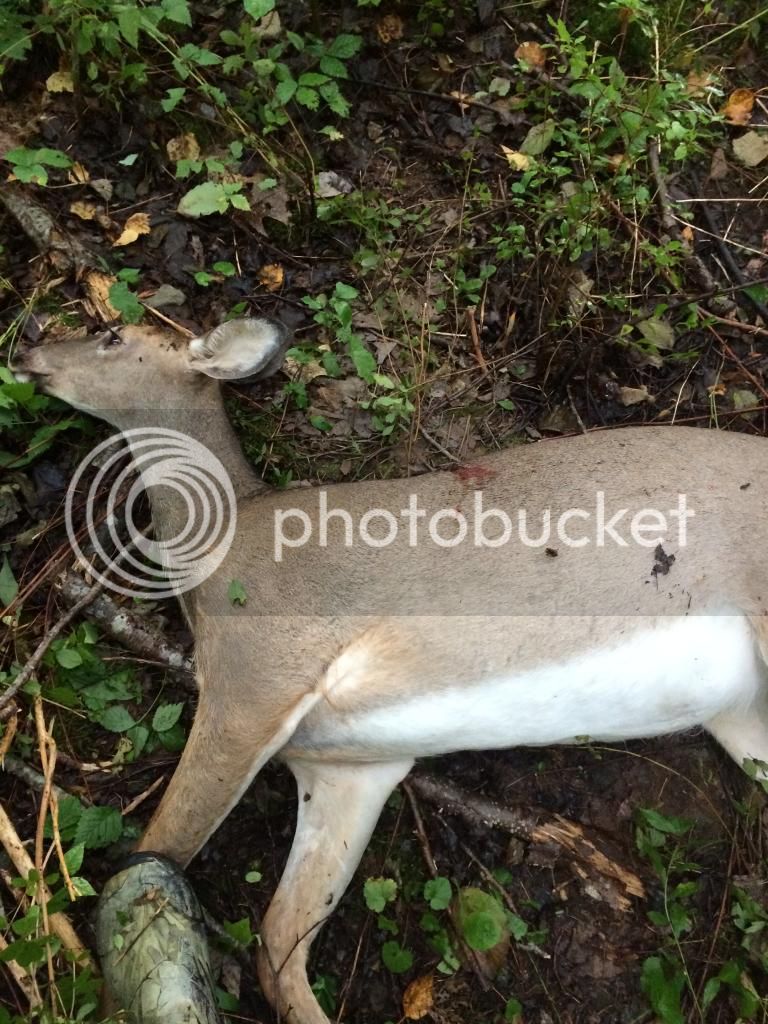 Success! I can remember my first bow kill with a recurve in about 1969. Same scenario, but it was a button buck.

Nothing like it! Congrats! Just remember all of us didnt have land at one time but we made it a priority to make it happen! It aint easy but if you work your ass off you can get some land too!

Congrats! Any deer with a bow is a good one.

congrats! your hooked for sure now!lol

I know that feeling well. With more experience, you will learn how to control it better. If I ever lose that feeling, I will quit hunting.

Congrats on your first bow kill!

This will be my 34th season and I still talk my way through it :).

Congrats, It's meat in the freezer. I'll never forget my first taken with a bow.

Congrats! The hardest part is over. It will get easier and easier now that you have one with a bow.

It's a blast, your story proves that!

CONGRATULATIONS......As everyone else has said, I still get excited too, being well north of 40 years of hunting. After remembering to put faith and family first, there is no feeling like the rush of getting into the outdoors to enjoy our passion.

Nothing like your first - It took my 3rd season to take my first deer. If there is one thing you can't practice it's that "rush" of the moment. Now you think a doe got you going wait 'til there are antlers involved! In most cases I have to sit down after shooting - it's mostly because my legs don't work right for a minute or so.

my first deer with a bow was also my first deer ever. it was small 8 point. My shot was a little back, but the deer was quartering away enough to get liver and clip a little offside lung. He went about 200 yds and the tracking job was done at night on hands and knees through a swamp. an experienced friend of my helped on the tracking....he finally declared that he could smell a deer and we found my buck about 10 yds ahead of us at the point! from that day on, i have learned to smell deer....I have helped recover several friend's deer by smelling them..lol.

After the shot, I had to quickly sit down because my legs just couldnt hold me up. It took the better part of an hour before I felt composed enough to climb out of the tree. fast forward to the last deer that i shot...November 2013...had the exact same thing happen. I could hardly move my fingers to text my wife to let her know i just shot my biggest buck!

Congrats on your trophy!!! Every deer you get with a bow is one in my opinion. I was inflicted with a really bad case of DEER RASH 28 seasons ago and have to scratch it every fall. I have my first bow kill which is a 40 inch P&Y white tail displayed proudly on my wall!!! You only get 1 first. Congrats again!!

Congrats on 1st deer with bow.

Congrats on your first deer!
S

Sweet! The first one is always special.
You must log in or register to reply here.

Got my bear mount back