Food sources under stress in the arrowhead region of MN? Lots of stories like this popping up these days.

Weren't the 70's and 80's the last time the deer population was way down as well? I truly don't know, wasn't born yet. 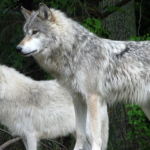 Cook County authorities in far northeastern Minnesota are asking residents to be vigilant after several incidents were reported of wolves attacking dogs and approaching people on the north side of Grand Marais.

Few details have been released about the encounters or whether any injuries have been reported, WCCO reports.

Sheriff Leif Lunde told The Associated Press that anyone who comes into contact with a wolf that appears to be dangerous should contact the Cook County Sheriff’s Office.

In the first documented case of a wolf attacking a human resulting in serious injury, a 16-year-old boy from Solway, Minnesota, was bitten last year as he camped with friends at a Chippewa National Forest campground near Lake Winnibigoshish.

The surprise attack left the boy with a 4-inch wound on his scalp that required 17 staples to close, NBC News reports.

Tests revealed the wolf had brain damage and deformities that officials suspected were factors that led the wolf to attack. The animal tested negative for rabies, The Star Tribune reports.

In Minnesota, two previous wolf attacks did not result in injury, The Star Tribune reports. One incident involved a logger in the 1970s. The other attack happened to a rabbit hunter a decade later.

Part of the Minnesota Department of Natural Resources’ mission is to address conflicts between wolves and humans.

On the agency’s website, experts say wolves typically avoid people. But sometimes wild animals become habituated with people or lose their fear of humans, particularly if the animals are being fed by humans.

But several well-documented accounts of wild wolf attacks have been confirmed in North America, including one that killed a young man in Saskatchewan in 2005, and another involving a woman in Alaska in 2010.

The DNR warns that people should never encourage a wolf or any other wild animal to approach, and hikers and campers should take all necessary precautions to prevent mishaps involving wildlife.

According to the most recent population survey by the DNR, an estimated 470 wolf packs and 2,423 wolves lived in Minnesota’s wolf range last winter.

I won't let an unknown dog get close to me or my family... BOOM!

We've had instances of people getting bit walking the beach road from others' pets. Sorry your animal isn't on a leash, neither is my .45.

Sd- there is a report of a wolf taking a small dog from a yard-just west of our zone 172.

sandbur said:
Sd- there is a report of a wolf taking a small dog from a yard-just west of our zone 172.
Click to expand...

Judging by the quantity of wolf scat we saw on the road, and the deer we didn't, it doesn't shock me one bit.
You must log in or register to reply here.