I like some of the stand placement threads I have seen, so I thought I would put up some aerials of where I hunt and let you guys go at it.

This is 80 acres, the northern border is the yellow line, the southern border is about where horizontal section of the road is if that was extended both directions. The west border is the left edge of the aerial, the east border is almost to the edge on the right There is land on all four corners of road intersection, but the two smaller we basically don't hunt. the smallest section in .25 acre and the furthest east is about 3 acres.

The field is the high spot. 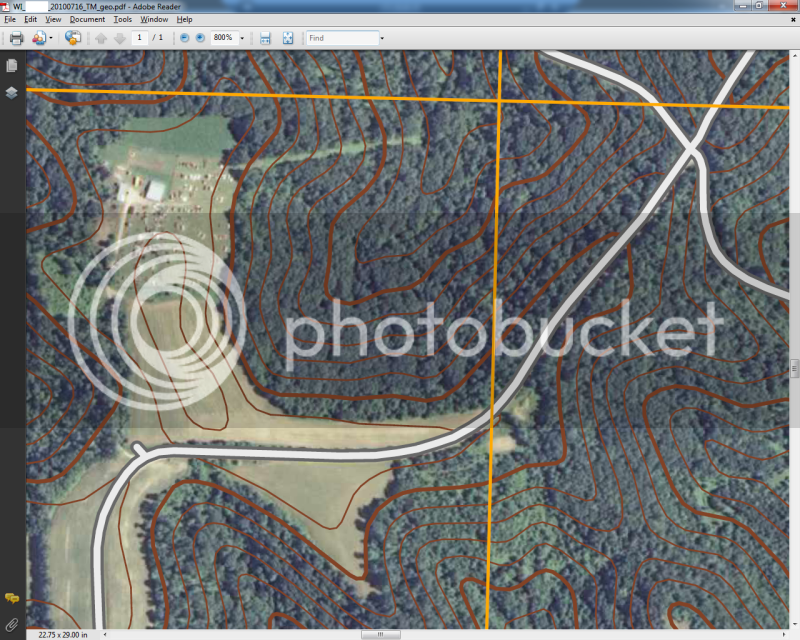 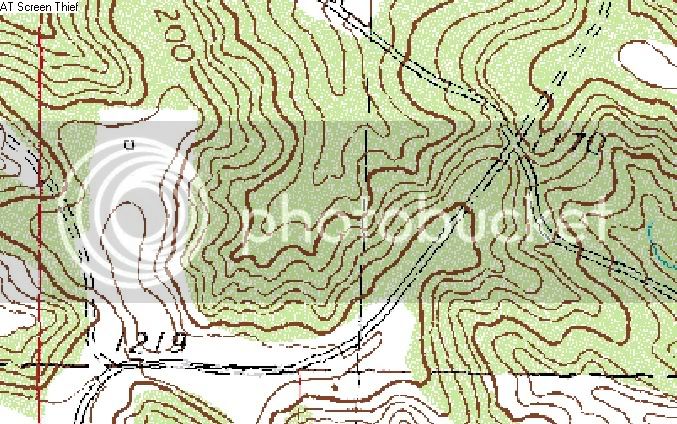 Yellow marks are places we have had stands before, we currently don't have stands in all of these places. The red circle is a permanent tower stand. 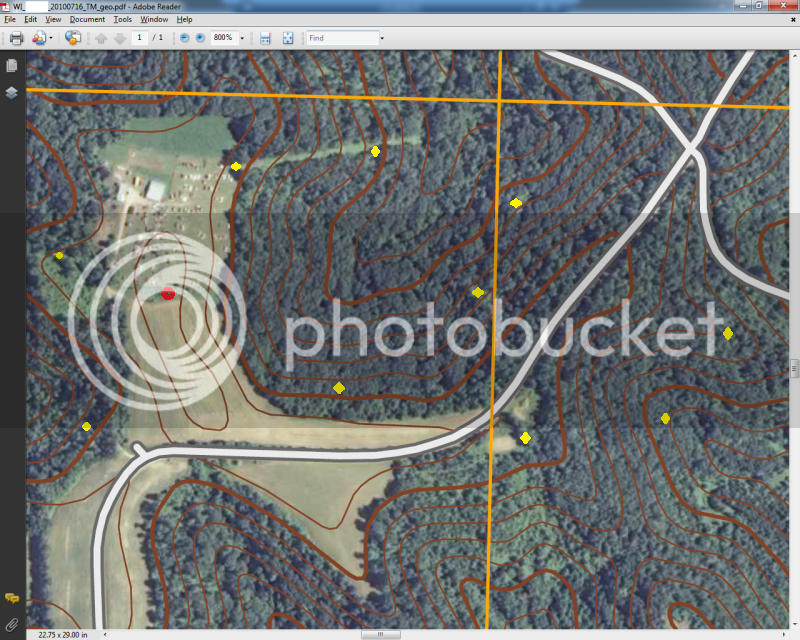 I see one spot that I think could be the best spot on the whole place, the problem is, it is in the middle of an intersection! :( Is there any signs of heavy use in that bottom near the road crossing? Any way you could hunt that area? How busy are those roads?

The roads aren't too busy, the road that heads North East is a dead end. The South East road that goes through the property doesn't have any houses on it so mostly it is used by some of the local farmers. I would say most of the traffic that does comes through stay on the SE to NW roads. During the gun season I would guess that is about 2 cars an hour.

The deer due cross the road in that area. We made a trail a few years ago (for the purpose of retrieving deer with a 4 wheeler) from that corner past the stand west of the corner then to the bottom. The deer seem to use that now as well. The stand area I have used west of the intersection sits on a spur, that is better seen on the traditional topo map. The spur comes off the main ridge some what steep then levels off for a bit than becomes steep again and I currently have a stand in that flat area. I have been thinking about moving it closer to the corner.
B

I would have a very high suspicion that bucks will bed in the spots I put the red circles and will rotate depending on the wind.

I feel like most of your yellow dots are in spots that I think would be decent stand spots. My only concern would be access for some of the stands deeper in the woods on the more eastern side of the property. Adding a stand to the northwest of the building site seems like it could be a good spot as well.

I need to look at 2 foot contour map to see that many contours on our farm!

This isn't one of those properties that I look at and a lot specific spots leap off the screen. That said, there are a couple that I'd do checks of, based on the topo/aerial. The NE & NW corners of the field to the N of the buildings. Same with the cut that is about centered on the N side. Then there is a potential erosion cut tip stand to the W of the buildings. I assume you checked the one in the SW corner, as you have a stand fairly close to there already. Based on the topo, the cuts look like they are likely to be too easy to cross to funnel deer, but topos can't be trusted either way in that regard. They'd need to be checked.

There's also probably something worth setting up on in the area that WIWhip suggests. So long as the road doesn't have some super deep ditches, railing or something like that, they're probably crossing heavy in that area.

also, if you take odor control super serious, there has to be somewhere at the bottom in the deep valley to the E of the buildings, and the lane makes great access (as you obviously know, with 2 stands already on it). You better take odor control to the extreme, if you go down in there, though. There will be no "safe" wind at the bottom.

You don't specifically say either way if you can make alterations to this place and how much, if you can. This is a property that could really benefit from some blockading work. It doesn't have naturally well defined movement patterns, but you could sure make it so it does, assuming you can do some work. Otherwise, it's all about wearing off boot leather to find that gem.

Sorry I couldn't be more help on this one

Thanks for the feed back guys.

Here is some information I should have told you up front. The North West corner is basically cattle pasture, they are not in that wooded portion all the time, but they are rotated through there. So there is basically no ground cover in there, though I have seen deer tracks. The cut through the woods is a where the power line comes in for the barn. Right now it is thick with reqrowth to the point where I expect the power company to come in clear it soon.

Steve can you clarify what you mean by a "erosion cut tip stand". I assume you are talking about a gully in the hill side that are deep\wide enough that the deer would rather go up and around versus across. If so there is one defiantly by the driveway in the SW corner area and another east of the tower stand. There is also a pretty good gully by road, but it really doesn't start to be bad until its on the northern neighbor's property.


BJE80 said:
I would have a very high suspicion that bucks will bed in the spots I put the red circles and will rotate depending on the wind.
Click to expand...

The spots you have circled are low spots towards the bottom of a draw (hope that is the right term), I though bucks liked to be higher on a spur or ridge. Am i wrong with that thinking?

kabic said:
The spots you have circled are low spots towards the bottom of a draw (hope that is the right term), I though bucks liked to be higher on a spur or ridge. Am i wrong with that thinking?
Click to expand...

Holy cow. I missed that the field was higher and I thought those were high points 2/3 of the UP the hill. Sorry about that.

BJE80 said:
Holy cow. I missed that the field was higher and I thought those were high points 2/3 of the UP the hill. Sorry about that.
Click to expand...

I looked at this totally wrong too and thought the field was the low spot.

that's exactly what I'm referring to, kabic. They can be some of my favorite rut stands, as bucks wrap the tips while cruising for does. When they occur on somewhat narrow ridges (not the case here), you can cover the bucks traveling the edges up and down, those wrapping the tip and often the ones running the ridge itself. Mature bucks TEND to travel on the downwind side of the ridge, anywhere between 5-20% down from the apex, but they don't always follow the rules and sometimes march right down the top center of the ridge. Being able to cover all those things ups the odds a bit more.

Now, you don't have that setup, but you may indeed have a couple where the erosion cut comes closer to the open ground. That's almost as good. It encourages bucks to pinch between the cut and the open ground. At the same time, talk about low impact stands! You're hunting deep woods movement, while just being inside the woods.

On those setups, remember that on most mornings with anything short of stiff winds, a wind blowing from the stand to the trail wrapping the cut is actually a safe wind, as soon as the AM thermals kick in. Your scent will carry right over them. Afternoons, the opposite occurs and they'll get a nose full. In fact, your odor will most often hug the ground all the way down into the valley. On PMs, you need the wind blowing out into the open ground....UNLESS you go nuts on odor control. Do that and you can hunt anywhere up until late season. No matter how nuts I go late season, I get picked off by a % of the deer seemingly downwind.

P.S. I'd walk the E edge of the field looking for similar cuts, as well. The topo doesn't show anything that really looks like one on that side (SE corner looks most promising), but those USGS maps are made every bit as much with aesthetics in mind as accuracy. To get the pretty flow of contours, they're more than willing to brush accuracy aside (I made contour mays for a few years for USGS when I was first out of college). So, you may well have some good erosion cuts on that side that aren't showing up well.

This has nothing to do with stand placement(you already have a tower there), but I see one improvement I would make right away, if possible. I would put up a screen/travel corridor across the field between the 2 woodlots to the east and west. An "alley" between these areas would encourage deer to cross this area right in front of the tower stand(similar to what John used to cross the field in one of his threads. It would have to be thick and tall to give the feeling of safety to the deer using this corridor, but once they were accustomed to using it, I think you would start to see daytime use.