Out mushrooming today in SW MN I found a few new flowers I'd never seen before. Any guesses what they are?

These flowers were growing on a bush about the size of a lilac.

Public land. There wasn't too much of it. Prickly ash was far worse where I was.

When we were kids, we would take the wild columbine and bite the little round balls off of the ends of the flower. sweet like honey.

give it a try.

Hmmm. Interesting. Gonna have to wait for another time. I'm back in the concrete jungle for the week.
D

Not sure on flower but that looks like bush honeysuckle to me.

I agree with Columbine and honeysuckle. If it's Amur Honeysuckle (Lonicera maackii) you ought to give serious thought to killing it wherever it is. It will be on your land soon enough. Maybe you're in a different climate zone, but in Kansas it greens up first and goes dormant last, outcompeting everything. Birds spread the seed. Burning doesn't slow it down. It grows too tall for foliar spray. Cutting it really pisses it off. The cut stumps resprout 10 fold if you don't paint them. Once the big ones are cut down, annual mowing takes about 4 years to have an impact (have you ever tried mowing the woods?) I'm in my third year of a 5 acre test plot that I scraped the top inch or so of soil with my skidsteer bucket. I tore out everything but trees & lost a lot of them to root and trunk damage. I'm hoping the native plants will recover from the existing seed bank and the honeysuckle will be small enough to be controlled by competition & selective spraying. It doesn't look like it's working, but I'll give it another year or two. The stuff is just too thick. I'm still darn near spraying everytwhere (spring and fall) & killing the native stuff with overspray. My next test plot will be basal bark application of Remedy to the thousands of stems/acre. If those both fail, I'm thinking about mow & gly the entire woodlot (about 50 acres) for 2 or 3 years then reseed native forbs & grasses. I used to think Musk Thistle and Serecia Lespedeza were a PITA - I didn't know how easy I had it. :(

I have found two honeysuckle bushes on my property and they have never seemed to multiply. Both are growing in a protected location under some red cedars.

I have found a different type of honeysuckle in the ditches about 5 miles away. It seems like it had a yellow flower???

I wish I could say buckthorn has never spread!

Columbine seed is typically ready for picking in Middle / Late July. Last year I picked a mustard jar's worth of seed, and if you know how small the columbine seed actually is, that is a ton of seed. Just wait for the flowers to turn brown and you'll have a seed pot filled with tiny little black seeds. It does well in sandy soils, partial shade.

Here's my daughter helping spread the seed around the farm. 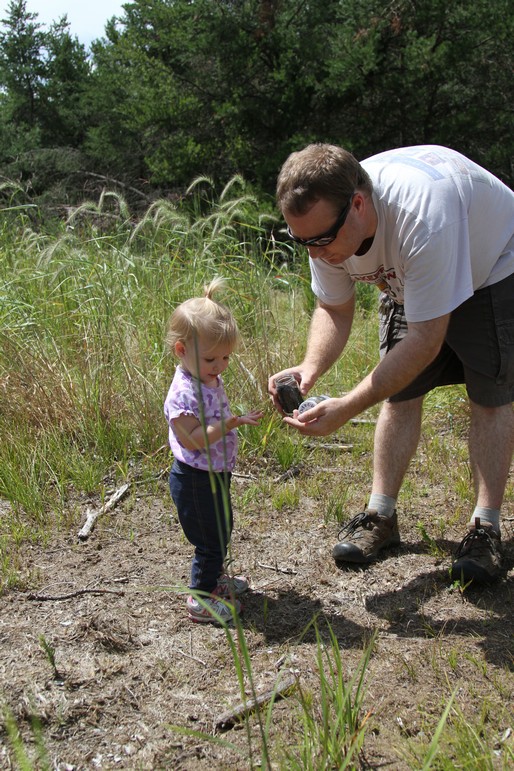 Hi smsmith & sandbur,
That'd be great if they don't get so bad where you are. I wish I'd never seen one. Here's some additional info if you're interested. http://www.invasiveplantatlas.org/subject.html?sub=3040#maps

smsmith,
Did you ever find a product or practice that was effective controlling it (the honeysuckle)?
Thanks, kskid

Thanks sm! I was hoping you'd found something on a bigger scale. I've had good luck stump treating with Tordon RTU also, but one at a time just isn't getting it. I'll keep looking. :(

I tried roundup on some buckthorn last fall and forgot to check it this spring.

smsmith said:
kskid..I'd think a late fall foliar application of gly would be effective as well. I know that is a preferred method of buckthorn control. Both buckthorn and honeysuckle hold their leaves well into the fall while most natives have already dropped theirs. Makes hitting the targets easy and doesn't impact non-target species.
Click to expand...


Thanks smsmith. As much as I hate tromping around my hunting ground in late fall, I may have to suck it up one year and try that!

I have had okay luck with foliar application with a hot dose of gly prior to everything else greening up. I was told to try to spray it in the fall but there isn't a way in the world i am going to do that. I have found hack and squirt to be just about as easy late winter.

Hi Stu, tb here. That's the best motivation yet for me to get in the stand early! I hate mosquitos, but not near as much as I hate honeysuckle.

Thanks Booner - Standing to H&S sounds much faster than kneeling to cut and paint.
You must log in or register to reply here.

oak tree is changing it's mind about what species it is!